Getting Started with a CDP? Find Your Killer Use Case

So you’ve solved the question of whether you should build or buy a Customer Data Platform, and now you’re getting started with a CDP as the foundation of your CX tech stack. But where do you begin?

Today we’re going to talk about the important role your use cases play when buying and getting started with a CDP. We’ll be taking insights from Ben Thompson, Director. eCommerce Analytics and Tag Management, who spoke at length about “Tips for Getting Started with a CDP” at our most recent Digital Velocity. 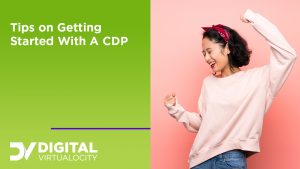 Getting Started with a CDP

You get out what you put into any Customer Data Platform initiative: you’ve got to have the right staff with the right skills, the right tools, and the right strategy.

When you’re getting started with a CDP, you might notice that— besides there being a lot of very different types of CDPs out there— there’s a lot of possibilities for what you can do with one.

A single view of the customer can unlock benefits for marketers, analysts, data scientists, and customer service reps. It can fuel customer experience, retention, growth, IT, and privacy initiatives.

With so much power and potential at hand, it can be easy to lose sight of the business goals and the impact you can have in a short amount of time.

So when you’re getting started with a CDP, one of the most important things to do is to harness that power responsibly to avoid a case of trying to boil the ocean. Like the teenage Peter Parker, the power you’ve been given needs to be restrained in your youth, before the wisdom of experience can guide you.

When it comes to CDPs, reigning in your power early on means you need to find that one killer use case to start.

The Killer Use Case

What your killer use case will be depends on your company’s unique needs. But it’s out there. When Ben Thompson was getting started with a CDP, his company was aiming to overcome a host of challenges associated with their eCommerce customer experience campaigns:

There were a lot of ways they could attack these problems with their CDP initiative. Finding that one killer use case, though, solved several challenges for Ben as he was getting started.

First of all, prior to launching, there was internal resistance to the Customer Data Platform. IT teams wanted to build the tool in house, while Marketing and BI teams felt like their turf was being trampled.

The politics can be rough when initiatives remain in the realm of the hypothetical. While no one wants to have their job changed by an outside force. The killer use case can show the value of the CDP and, more importantly, illustrate how the CDP will improve their day-to-day work lives, oftentimes by removing a lot of the frustrating data work they’d otherwise have to accomplish.

Secondly, the killer use case is key for getting executive buy-in. Tying the business value of the tool to how it will impact the day-to-day and illustrating that there’s a speedy time-to-value on top of that will get executives backing the project.

For Ben, the single killer use case came from the Marketing organization. Their use case was tying a single use promotion code to a single user in real time on any event. So if you abandon a cart, a promotion could be generated and sent out through email without creating a bunch of coupon codes that run wild over the internet.

It sounds like a simple use case, but it solved a long-standing problem and created immense value for the company.

Getting the early win is great, but they’ll do more than prove the value of the CDP. Your first use cases set the stage for the use cases to come. For Ben’s team, that meant building out new campaigns to compliment the first set they built out, creating more nuanced customer experiences with more relevant content and offers.

Going Beyond Getting Started

Getting that first killer use case under your belt will feel great, and you’ll undoubtedly be in a rush to create more value for your teams.

Check out the rest of Ben’s presentation to see how he kept the momentum going after the first use case, and if you’re interested in using Tealium AudienceStream CDP, he’s got eight great tips and tricks to make the most out of your CDP right away.

So be sure to tune into “Tips for Getting Started with a CDP,” and get inspired to kick off your CDP initiative on the right foot.

Matthew Berger
Matthew Berger is a content strategist and creator with years of experience helping B2B and B2C companies tell their brand's stories in every form.
Recommended Posts
Post Author

The New Era of Dynamic Marketing Is HereData-driven Marketing