Using Google to Track the Spread of Flu

A while back we published a post on using Google to predict elections. A similar post has recently been submitted by Jeremiah Owyang on the use of social networking stats for similar analysis. Obviously, in both cases, one cannot heavily rely on these numbers to predict elections, as they’re a reflection of interest and one cannot guarantee that interest turns into votes. But in both cases, there’s a great deal of entertainment value associated with the data.

However, a recent article in New York Times reveals a much more powerful side of Google Trends. In this case, Google is using its search data ot track the spread of flu within the United States. More specifically, deta from last year revealed that Google saw a spike in number of searches for terms such as “flu symptoms” about two weeks before the CDC (Centers for Disease Control) reported regional outbreaks. The graph below shows the comparison between the two data sources.

I must admit this is one of the most clever uses of Google Trends as it captures real data in a manner that can be used to actually predict trends. Congratulations to the folks at Google. 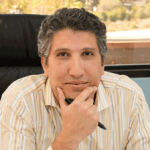 Ali Behnam
Ali is one of the founders of Tealium

How to Thrive in the New World of Conversion Measurement with Tealium + Google
Discover how Tealium + Google can help your brand obtain key insights and accurate conversion metrics without third-party cookies.
Read More
Audrey Lewis