Some people have a hard time dealing with confrontation, especially when it comes to the workplace. Imagine a situation in which you are standing outside a meeting room and need to hop on a conference call. It’s imperative that it starts on time, but the meeting before you is running over. Do you knock quietly? Do you interrupt and open the door? Do you stand outside with that mildly impatient look on your face so they get the hint to vacate the room? Cue our Tealium engineers who came up with a creative solution integrating data with Internet of Things (IoT) devices, such as Philips Hue color lightbulbs, Rasperry Pi computers, and our internal calendar system. 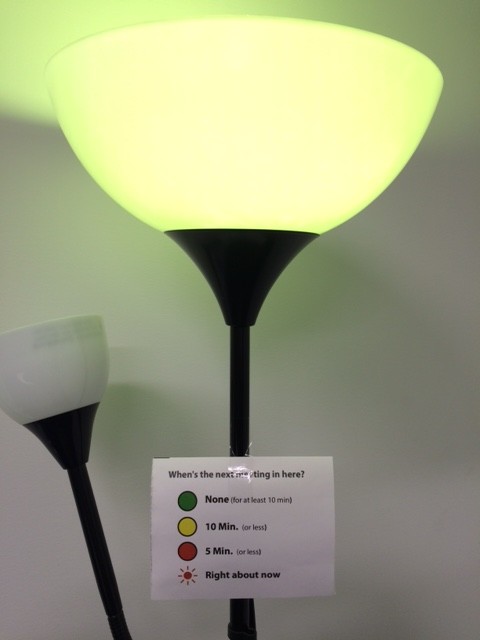 If a meeting room is in current use and there is another meeting scheduled immediately after, the lights change color depending on how much time is left. Someone who once lost track of time now has a visual way to know they should start wrapping it up. Green means that there’s no meeting immediately after and that it’s okay if you run over, yellow means you have ten minutes, and red means there’s a meeting scheduled in five minutes.

“We thought this was an unobtrusive way to remind them that it needs to be freed in a few minutes. Something that uses audio would be disruptive, especially if you’re on a phone with a customer, but something like a light is subtle. Plus they’re low maintenance, relatively low powered, and they fit anywhere a normal bulb would go.”

It’s a gentle nudge. When it gets down to the last five minutes, it will be red, and at the very last minute, the red will flash on and off. No more awkward knocks and disruptions.

The technology that fuels the lights is based on principles from Rasberry Pi computer programming. Originally helping students to learn basic programming because of its low cost, Rasberry Pi helped spark the creation of many DIY technology hacks. It’s basically a tiny computer that you can program and tie to real-life scenarios, such as, hardware, motion sensors, electronics, etc. It is the brain of the system, and talks with both Google Calendar (how we internally manage our conference room usage) and the Phillips Hue Bridge, which controls the color of the light bulbs.

There are tons of ways to reimagine the office experience leveraging new IoT solutions and other technology such as employee-centric mobile apps and proximity detection. The lights could one day evolve to fill in the flaws of our imperfect human tendencies. We’ve all been guilty of changing a meeting room location at the last minute but not canceling the initial meeting room that was previously booked. In the future, a beacon could be placed in the conference room and if no bodies are detected after a certain amount of time, then it could communicate to Google Calendar and free up the room.

The implications for IoT solutions can be endless as each step that connects to every part of our behavior is explored. It’s our job as technologists to optimize the personal experience, listen to the data as it describes human behavior and make technology complement the experience. 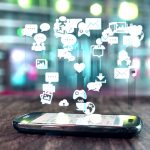 Mobile Apps On the Pulse of Future TechnologyIoT and Mobile

ITP 2.x and the Latest Updates in the Browser Consumer Privacy BattleInsights and Analytics, IoT and Mobile, News, Under the Hood