Is HBO’s ‘Silicon Valley’ Fiction or Reality? Tealium’s Just Happy to Be Part of It!

We’re not TV critics, but if we were, we’d describe it as the intersection of “revealed hilarity and disturbing accuracy.” We’re writing, of course, about “Silicon Valley,” the new HBO hit comedy series created by Mike Judge, the multi-hit producer of classics such as the movie “Office Space.” Shown on Sundays at 10 p.m., the show tells the distinctly American story of how virtually any software engineer can suddenly and accidentally be catapulted into the role of entrepreneur.

While Hollywood is typically thought of as the pinnacle of fiction, where wild stories and dreams get digitized as quickly as the ink on scripts dries, there are actually times when it nails situations all too closely. This series is no exception.

Any viewer who has spent considerable time in the Silicon Valley would likely agree that the show has done well to satirize the comedy, irony, anxiety and wealth that have been coming out of the region for decades now. At times, the details are so accurate and personalities portrayed by the actors so spot on that we half-expect disclaimers to pop up stating, “Any similarities between characters and actual events are purely coincidental…”

In the episode airing this Sunday, as revealed by a compilation video on TechCrunch, the producers of “Silicon Valley” go to great lengths to replicate the TechCrunch Disrupt SF conference – the proving ground that has been making and breaking tech companies for years. As the cameras follow the cast around the Hollywood set, viewers may notice that among the fictionalized companies hawking everything from microwave-based personal heating devices to posterior-inserted health monitors, are a number of real technology brands that were invited to help recreate the event – Tealium included.

Back in September of last year, at the real TechCrunch Disrupt SF, one of the producers of the show came to our booth and starting chatted us up about our solutions and soon after asked us if we wanted to be in one of the episodes. Naturally we laughed it off and thought nothing of it – until we were formally invited up to Los Angeles to recreate our TechCrunch Disrupt set-up. 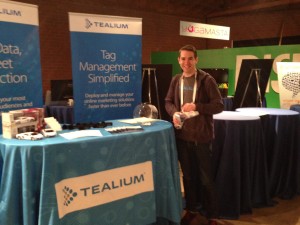 On the set, Adam Corey, Director of Business Development manning the Tealium booth

Very excited and a little unsure of what to expect, a few months later we arrived in Hollywood and were absolutely blown away with the effort and attention to detail to make an exact replica of the event, even down to the same food being served. Referred to as “real people” (because we were among the 14 real companies in attendance), we were given the exact lanyards from the Disrupt SF registration, and then sent on our way to set up our booth precisely as we did at the original conference.

The following day, we were told that they needed a booth from a “real company” to be next to the main characters’ start-up company, Pied Piper, and they had chosen us! After moving our booth and getting our hair teased by the stylist we were ready for our on-screen debut. 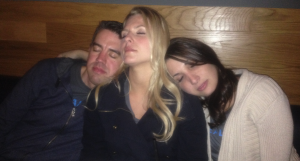 The Tealium crew all tuckered out after 12 hours of filming

One overwhelming observation has stuck with us throughout this entire experience: Acting is hard work! Two days of being on your feet for 12 hours is not as glamorous as one might imagine. Seriously though, we don’t pretend to know what it’s like to really be actors, but over the course of our time there, we each had a crash course in pantomiming (some of us were a lot better at it than others), as well as the opportunity to whisper real demo presentations of our solutions at least 100 times to non-techie geek extras who probably had no idea what we were talking about. In any case, they all did a fantastic job in acting like they understood anyway and we can even say we’re all a bit more polished in our demo skills! 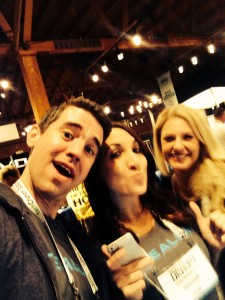 Catch our Hollywood debut this Sunday, May 18, at 10 p.m. PT on HBO, and continuing into the final Season 1 episode on June 1. For a chance to win some cool prizes, tweet @tealium with hashtags #TealiumHBO and #HBOSiliconValley when you see our Tealium booth banner. Let us know too, which of the fictional company names you liked best, was it HumanHeater, SelfSurgeon, MicroDrone, PanicAttack … or something else?

AJAX tracking.. When URLs no Longer ChangeTag Management
Tealium Customers in the Spotlight: How Do You Benefit from Tealium?Tag Management