Being There for Customers at the Right Time

The Tealium Customer Data Platform which is comprised of: Tealium iQ™ Tag Management and AudienceStream™

How Can Orange Be There at the Right Moment?
Orange is a leading French Telecoms provider with an impressive registry of two million customers. Each year approximately 400,000 new enterprise businesses are founded in France; each a potential new revenue source for Orange. Supporting businesses from start-ups to large corporate enterprises, Orange offers diverse product lines and telecom services. Orange understood the impact of real-time marketing on purchasing decisions and wanted to leverage their data to increase market share.

Despite collaboration from a number of teams, Orange was struggling with data fragmentation. Customer insights were lost in over 200 variables in the data layer. Data was batch processed causing severe delays. Orange lacked the ability to action data at the time of visitor engagement. Reviewing their customer lifecycles, Orange identified a number of points in the different journeys where their telecom service requirements changed. These observations led Orange to start exploring how they could take immediate action as customers engaged with the business. The delay in data insight was also costing Orange potential revenue and customers. Orange also realised a potential opportunity to extend lifecycles; if they could predict future requirements for customers.

Understanding the Customer
Orange worked with Tealium to adopt a data-driven approach towards customer insight and engagement. By deploying Tealium’s Customer Data Platform (CDP) across their website and mobile platforms, teams at Orange could start analysing visitor profiles. Tealium iQ™ was used to aggregate data from all sources and fed into AudienceStream. From here Orange was able to stitch together an individual’s identity captured across multiple data sources, devices and channels. The data and marketing teams gained deeper insight into the two million customers and two million unique website visitors they were trying to engage. Through analysing data in real-time, Orange could action insights immediately. For example – Orange learned that web visitors make more considered purchases during working hours, often returning in the evening to convert.

Orange wanted to add context to current visitor behaviour. With this in mind, Orange analysed data collected over the last four years. Trends in visitor behaviour echoed general industry trends. Orange discovered an increase in the number of 18-34-year-olds engaging via mobile. Yet, those over 40 years engaging via a mobile device actively decreased year on year. Orange then compared these results to data collected during the sales cycles. The rise in mobile engagement from 18-34-year-olds correlated with that age group demonstrating greater influence in purchasing decisions. This new generation of influencers in the B2B market had risen in the last four years and Orange needed to ensure they were targeting these people with the right message and at the right time.

“If I am not there exactly at the right moment, I am not going to be there at all,” Xavier Perret, Chief Data Officer, Orange.

To reach these new influencers, data teams were challenged to build a web and mobile campaign using their own data and the CDP. Orange wanted to compare the ROI and campaign performance using the CDP against results from their media agency, who had previously driven all marketing campaigns.
The data team was able to segment and target different audiences from the multiple customer journeys. Each audience segment then received a focused offering that appeared tailored and relevant to the individual. To remain objective, Orange ran the campaign under A/B test conditions, dividing the website traffic between their existing media agency and Tealium’s CDP.

Both teams were provided with clear objectives for this campaign:

“My challenge was to maximize the use of our data ecosystem, a data layer of 200 variables from ten websites and two mobile applications, to better optimize targeting efforts.” Francois Fleury, Web Analyst and Digital Data Manager, Orange.

Data teams used an aggregation of more than 200 key variables to analyse and transform the user experience throughout the campaign. This ensured that targeting remained relevant for their respective audiences in order to maximise conversion rates.

The campaign highlighted the need for Orange to master control of their own data. The control exercised during the campaign enabled them to leverage key insights to better target audiences.

The average cost per acquisition, for customers and prospects, when using the CDP was six times less than when using a media agency. The CDP also delivered a higher conversion rate, proving 360% more effective than the media agency. 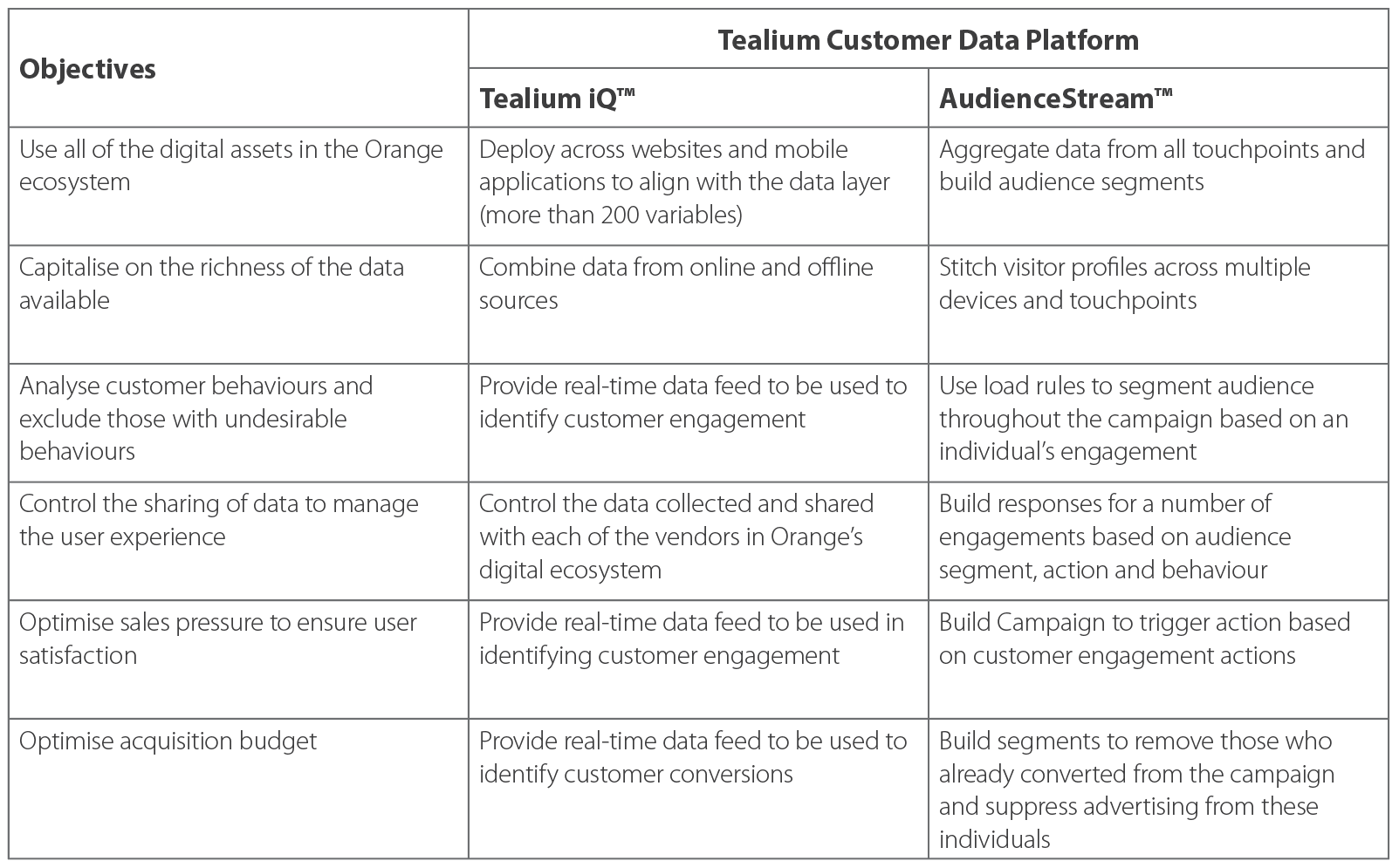 Orange had used the CDP to trigger actions based on engagement activity data. By analysing real-time data throughout the campaign, key insights were used to refine the campaign on the fly. This dynamic approach was led entirely by the data Orange collected. From this data, the teams were able to develop: Audience segments, messaging, ads received and actions for the CDP, as they learned more about their customers and the market. Orange started by focusing on a single use case: Cost per acquisition (CPA). This meant they could learn, test, measure and refine a campaign to generate results in real-time. Insights from the data collected helped to refine the messaging delivered to individuals and enhance the user experience. In turn, this drove the much more successful conversion rate.

Since refining their CPA use case, Orange has expanded their personalisation strategy with additional AudienceStream™ use cases. Next in their strategy is to integrate customer feedback and other data points into their digital ecosystem. This would allow controlled, two-way data flow between collection and activation vendors. By routing data through the CDP, Orange can maintain control of that data. Orange plans to leverage Tealium’s abundant integration marketplace to limit the work sent to the IT and deployment teams. The data teams at Orange are exploring the use of customer data to build algorithms that predict future customer lifestyle events. Identifying events such as office relocations and business development recruitment through buying signal engagements will enable Orange to offer the right support for each stage of the customer’s business.

“If you are using the right use cases, content and technology, you will create value for your customer – be there at the right moment for them,” Xavier Perret, Chief Data Officer, Orange.

About Orange
Orange is one of the world’s leading telecommunications operators with sales of 40,9 billion euros in 2016 and 155,000 employees worldwide at 31 December 2016, including 96,000 employees in France. Present in 29 countries, the Group has a total customer base of 263 million customers worldwide at 31 December 2016, including 202 million mobile customers and 18 million fixed broadband customers. Orange is also a leading provider of global IT and telecommunication services to multinational companies, under the brand Orange Business Services. In March 2015, the Group presented its new strategic plan “Essentials2020” which places customer experience at the heart of its strategy with the aim of allowing them to benefit fully from the digital universe and the power of its new generation networks.

Orange and any other Orange product or service names included in this material are trademarks of Orange or Orange Brand Services Limited.